Yarlington House was built in 1782 on the outskirts of the village of Yarlington where no house had been before. This was very much the heyday of Georgian architecture and the results speak for themselves: built of mellow brick with stone facings, it is a perfect example of the period both inside and out. The spot was very much an open space and George III, who was passing on his way from Weymouth to Longleat when the house was being built, was told it was the work of the new squire and is supposed to have said, “Hah! hah! a bold man, a bold man, to build a house there”. The bravery was rewarded for now that trees and a mature garden surround it, it is an absolute gem.

The West wing was added in the mid-1800’s in order to give more room in which to entertain than the conventional Georgian drawing room would allow. The hub of this extension is the Music Room which is now so suitable for Civil Wedding Ceremonies and other events. The ceiling there is in the Jacobean style and the walls were originally panelled in oak. 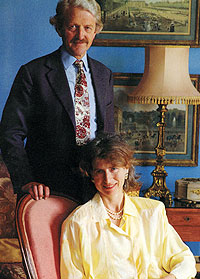 Yarlington House is the home of Count and Countess Charles de Salis who have contributed so much to the beautiful garden: building the ha-ha, planting the pleached limes, creating the sunken garden at the other end of the lawn – and many other features. The walled kitchen garden and the dovecote are contemporary with the house.

Their four daughters are now all married but they return regularly bringing various combinations of their twelve grandchildren. It retains therefore very much the atmosphere of a family home – without losing any of its gracious, elegant style.

All this makes it the perfect setting for any kind of private or corporate event or entertainment: from weddings to presentations to exhibitions – the scope is enormous and the list of events held there is endless.

AT OUR MAGNIFICENT HOME

AT OUR STUNNING GARDENS